Home Entertainment ‘I have Deontay Wilder’s a**, soul, mojo and balls in my pocket, i own them!

‘I have Deontay Wilder’s a**, soul, mojo and balls in my pocket, i own them! 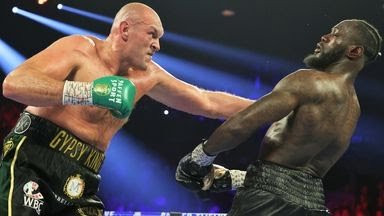 Tyson Fury believes Deontay Wilder has not yet mentally recovered from their rematch.

Back in February 2020, Fury stopped Wilder in the seventh round to capture the WBC heavyweight title.

Wilder has been out of the ring since the loss to Fury.

A planned trilogy was scheduled for July of last year, but then delayed several times due to the coronavirus pandemic.

Fury and his team eventually announced that Wider’s rematch clause had expired and they would fight someone else.

Wilder then filed a legal action to enforce the rematch clause.

The two sides are involved in an ongoing arbitration process, with a decision yet to be made.

Fury meanwhile is close to finalizing a deal to face Anthony Joshua, who holds the IBF, IBO, WBA, WBO world titles. Their fight would likely happen this summer, in Saudi Arabia. The bout would be the first of a two-fight series, with the second contest targeted by the end of the year or in early 2022.

Tyson Fury still thinks he’s got the best of Deontay Wilder mentally, however he believes Wilder will beat out Anthony Joshua in the early rounds of any fight.

“I always have said I fancy Deontay Wilder to knock Anthony Joshua out early, in one or two rounds. It depends if I give Deontay Wilder his mojo back, I’ve got it in my pocket,” Fury told Talk Sport.

“If I decide to ever give Deontay his mojo back and his soul, he might be able to box again. But until then, I’ve got his ass, his soul, his mojo and his balls all in my pocket. I own them.”

TAG- a and balls Beauty blog Deontay Entertainment Events Fashion Fury gossip have I in Inspiration Lifestyle mojo my news own pocket politics Soul' them Tyson Wilder's
Previous PostOsimhen, Tomori Make Serie A Team Of The Week Next Post''When you do business with your soul mate, everything becomes easy''- Toyin Lawani writes as she shares sultry photos of herself and her fiance