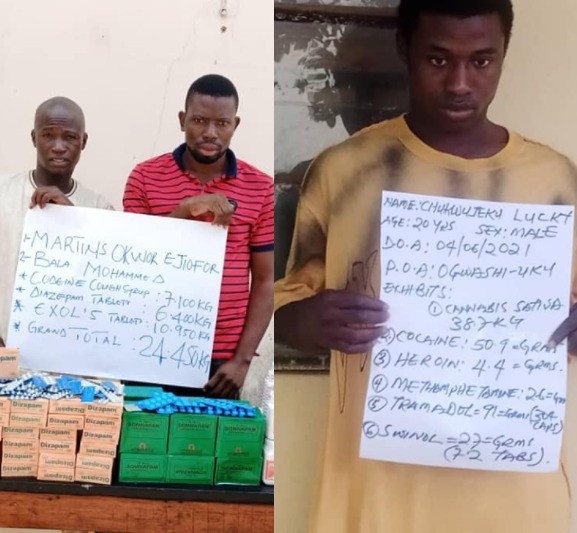 Operatives of the National Drug Law Enforcement Agency, NDLEA, have arrested two drug dealers, Martins Okwor Ejiofor, 31, and Bala Mohammed, 33, with a total of 24.450 kilograms of assorted substances meant to be delivered in Gwada, Shiroro Local Government of Niger State where bandits in neighboring forest buy their illicit drugs. Gwada has one of the two functional markets bordering the forest where bandits and kidnappers hibernate in Niger State. 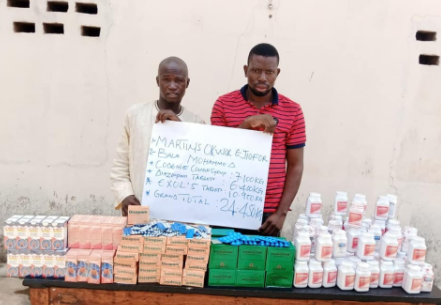 A statement released by Femi Babafemi, spokesperson of the anti-drug agency, says drugs seized from the suspects include Codeine 7.100kg, Diazepam 6.400kg and Exol 5 10.950kg.

”Martins Ejiofor had travelled to Lagos with the second suspect to procure the drugs and deliver to dealers in Gwada. During interrogation, he confessed that he had been arrested with over 50 kilograms of cannabis sativa and charged to Court by the Niger State Command of the Agency in 2020. He completed his one-year jail term in March this year and resumed his nefarious illicit drug business.” the statement in part read

Babafemi added that another suspect, Usman Abass, 38, was arrested with 6.8kg cannabis Sativa concealed in a sack containing used clothes, which the suspect bought at Alaba International Market in Lagos. The suspect upon interrogation claimed that one Baba gave him the exhibit to deliver to one Lawali in Katsina State before his arrest by a team of the Commands operatives attached to Jebba Area Command during a routine stop and search operation. The suspect confessed that he had transported cannabis sativa once to Katsina and that the latest trip was his second. 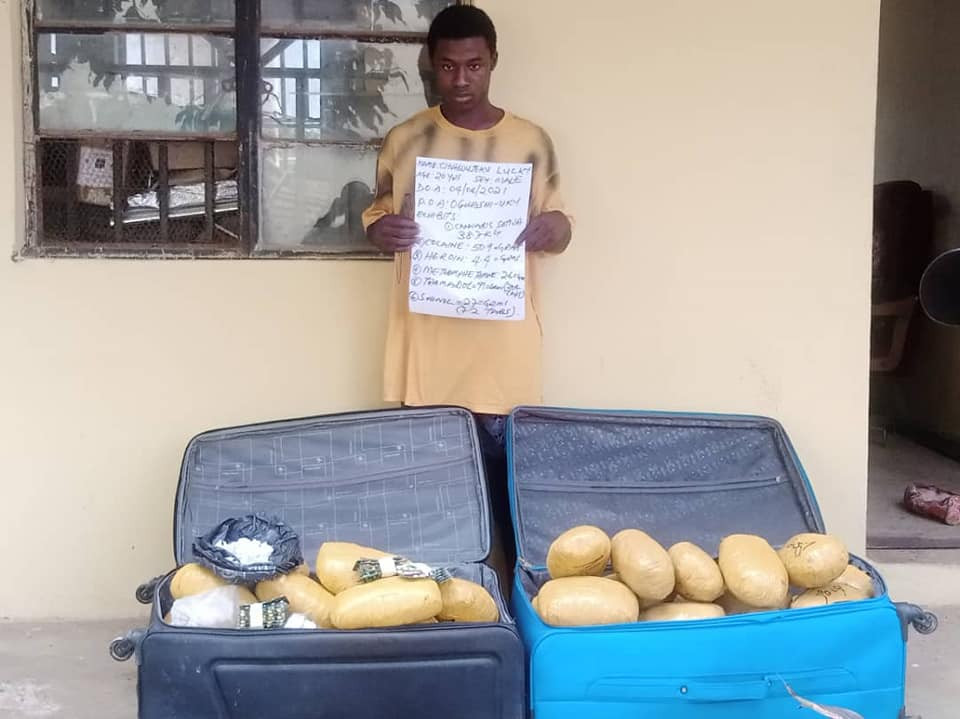 In a related development, operatives of the Delta State Command of the Agency on June 4, arrested a 20-year-old man, Chukwujeku Lucky, at Ogwashi Uku, Delta State with multiple drugs weighing 38.90 kilograms. Babafemi said some of the drugs seized from his apartment where he serves as a salesman include: 68 blocks of cannabis sativa weighing 38.7kg; 498 pinches of cocaine (50.9 grams); 33 pinches of heroin (4.4 grams); 304 capsules of Tramadol (91grams); 72 tablets of Swinol (27 grams), and 26 grams of Methamphetamine.

While commending the Commanders, officers and men of both Kwara and Delta state Commands for the arrests and seizures, Chairman/Chief Executive of the NDLEA, Brig. Gen. Mohamed Buba Marwa (Retd) said the development would in no small measure reduce the availability of illicit substances available to bandits and other criminal elements who take them as enhancers of their evil enterprise. He charged them to remain vigilant and continue to acquaint themselves with the latest disingenuous modes of concealment and transportation of illicit drugs by defiant traffickers.