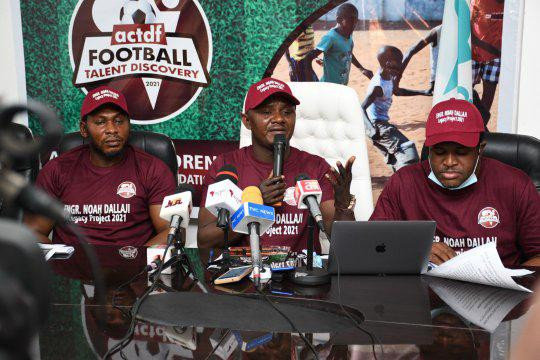 With preparations in top gear for the much anticipated Noah Dallaji Legacy Project Football Talent Hunt in Bauchi this weekend sports lovers and fans alike have been wanting to know more about the personality behind the laudable project.

He’s none other than Engineer Noah Dallaji.

WHO IS ENGR. NOAH DALLAJI?

He has also led many artistes and celebrities to attend several UN functions in the US, Brazil among others.

As has been mentioned earlier, he is organising a Football Talent Hunt in Bauchi his home state, working with soccer legends like Amokachi, Babayaro, Babangida, Yobo, Ikpeba, Eguavoen, Lawal, Kanu El Haj Diouf among many top ex internationals, in a bid to discover and sponsor many talented youths to academies abroad.

According to him,the programme advances ACTDF’s vision and mission to discover and develop Nigerian talents with the ultimate aim of developing the country.

He stated further that it is important to develop the natural talent of youths in order to maximize opportunities for a purposeful life.

‘Every man has something in him that can be activated and be useful in life. So you must try and discover why you came into this world and begin to be useful not only to ourselves but for the greater good of society.”

Dallaji said the Legacy project will continue to progress as an annual event, while assuring that the next edition would attract greater numbers of soccer legends and participants.

Apart from the football talent hunt, Bauchi will also be agog with the music of PSquare and other artists to spice up the weekend.

In the past week, Dallaji adopted some athletes proposed to him by the Minister of Sports for sponsorship to the Olympics. He is also working with the Nigeria armed forces to organise the next West African Military Games.

Dallaji is one of the emerging young dynamic leaders that may help redefine our nation’s future path.

So where would you rather be as Bauchi gets electrifying this weekend June 26 and 27.