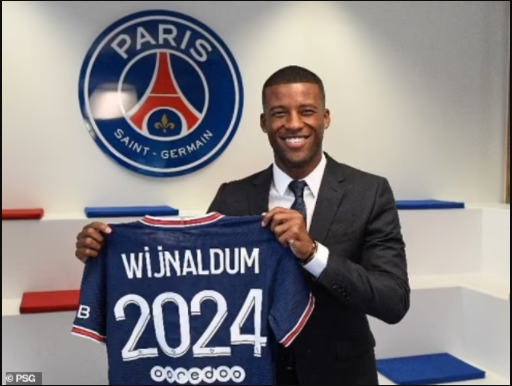 Paris Saint-Germain have officially unveiled Georginio Wijnaldum as their latest summer signing after the midfielder left Liverpool as a free agent.

The Holland international was unveiled on Wednesday and was seen holding the club’s jersey and smiling for the cameras before carrying out an interview with PSG TV.

PSG were able to beat off competition from Barcelona to snap up the in-demand Wijnaldum, who put pen to paper on a three-year deal until 2024. 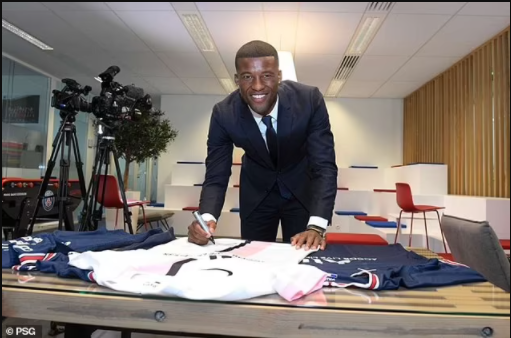 ‘I was at the end of my contract, and several clubs contacted me,’ Wijnaldum said.

‘When Paris came to meet me, everything went very well, and I quickly wanted to join Paris Saint-Germain.

‘Mauricio Pochettino had already approached me at the time, to sign me for Tottenham, so I had already talked a lot with him.

‘The whole club made me feel that they really wanted me, that played a big part in my decision.’

Wijnaldum left Liverpool after a memorable five-year spell that saw them win the Champions League and clinch the Premier League title.

He also helped the club lift the FIFA Club World Cup and the UEFA Super Cup, and he plans to continue challenging for silverware with his new team.

‘Winning titles is very important, that’s what we all want to accomplish as a footballer,’ Wijnaldum added.

‘And Paris wants to win, it’s a club that has progressed a lot over the years, which has played in a Champions League final, which also reached the last four last season.

‘I think the project is beautiful, and we are building a team to fulfil these goals.’

TAG(photos) a after as Beauty blog Entertainment Events Fashion free Georginio gossip he Inspiration latest left Lifestyle Liverpool news officially on politics PSG signing Summer their transfer Unveil Wijnaldum
Previous PostThere's no succession agreement between Buhari and Tinubu – VON DG, Osita Okechukwu Next Post"Ladies, regardless of what we put you through, stay loyal to your man," Michael Blackson advices women after he proposed to his girlfriend