After a research revealed that nuns used crucifixes to rape minors, Pope Francis expressed his “horror” at the prevalence of child abuse in the French Catholic Church. 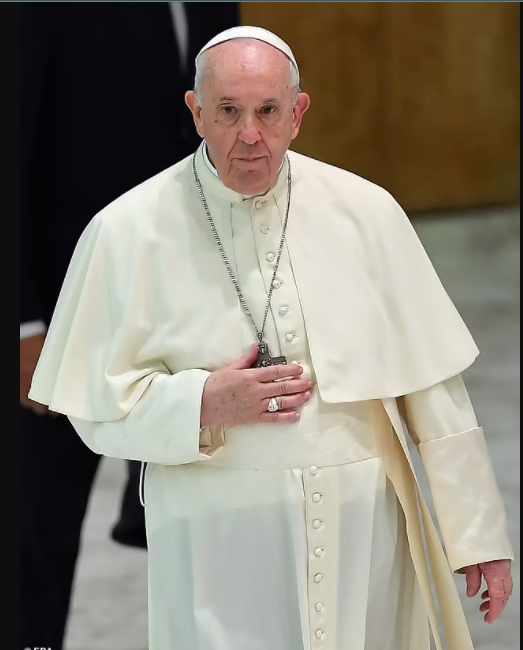 After a report revealed nuns used crucifixes to rape girls, Pope Francis expressed his “shame” at the scope of child abuse in the French Catholic Church and his “sadness” over the suffering of 330,000 victims.

After more than two years of study by an independent panel, a 2,500-page landmark report was released on Tuesday, October 5.

Between 1950 and 2020, an estimated 330,000 children were victims of sex abuse within France’s Catholic Church, with an estimated 216,000 minors assaulted by priests and other clerics, according to the panel.

The pontiff voiced his’sadness’ for the victims in response to the shocking study, which revealed that nuns used crucifixes to rape girls over decades of abuse that was covered up by a’veil of silence.’

‘Unfortunately, there are a significant number, and I desire to communicate my regret and pain to the victims for the suffering they have had,’ Francis said during his weekly audience at the Vatican on Wednesday.

‘And also my humiliation, our shame, my shame, for the Church’s incapacity to put them at the center of its concerns for far too long.’

‘I pray, and we all pray together – glory to you, Lord, and disgrace to us.’ Now is the time to be ashamed.’

He urged all bishops and religious superiors to take all necessary steps to ensure that “similar tragedies do not occur again.”

The investigation’s conclusions have sparked indignation, as the Catholic Church in France and around the world is dealing with an increasing number of abuse allegations and convictions.

When Francis was elected Pope in 2013, one of the major problems he faced was dealing with the flood of news regarding clergy sexual abuse.

He announced an end to impunity and altered Vatican law to require victims to disclose abuse, but victims have warned that this is insufficient.

In a message released Tuesday through his spokesman, Francis expressed his grief for the victims, but his remarks on Wednesday went even farther.

He urged the clergy to keep working to guarantee that such situations ‘do not occur again,’ and he offered his support to French priests facing ‘this difficult but healthy experience.’ He also urged Catholics in France to “take up their obligations to ensuring that the Church remains a safe haven for all.”

The ‘great majority’ of victims, according to the research, were pre-adolescent boys from a variety of social circumstances. Priests, bishops, deacons, and monks were the most common perpetrators.

Eighty percent of the victims were young boys between the ages of ten and thirteen, but numerous girls were also abused by priests and nuns.

‘Marie,’ a victim, stated that she was assaulted when she was 11 years old and that when she told her parents about it, they refused to believe a nun could do such a thing. For another year, the abuse went on.

She recalls a nun who would pick a pupil from her class to assist her with Mass every day.

‘I was 11 years old and had the appearance of a nine-year-old.’

‘She’d pick me every two or three times,’ Marie remembers.

‘She’d take me to her office, shut the door, and close the drapes.’ She would then put me on my knees and force me to read the gospel according to Saint Paul or another saint while she pinched my chest with one hand and pushed my underwear down with the other.

‘Of course, we were dressed in pleated skirts rather than pants.’ It horrified me and rendered me immobile. ‘I was truly [a gift] for this nun… because she understood she was not taking any chances,’ Marie explained.

‘Until the early 2000s, the Catholic Church displayed a profound and even callous apathy towards the victims,’ said commission head Jean-Marc Sauve at a press conference releasing the roughly 2,500-page report.

Three men’s bodies are hung from diggers by the Taliban after they were publicly executed.

Three men's bodies are hung from diggers by the Taliban after they were publicly executed.

The Super Eagles will not underestimate the 'tough' CAR side, according to Troost-Ekong.

Jake Gyllenhaal claims that recording sex scenes with Jennifer Aniston was excruciating because he had a 'crush' on her.