Lionel Messi is struggling at his new team, according to Thierry Henry. PSG 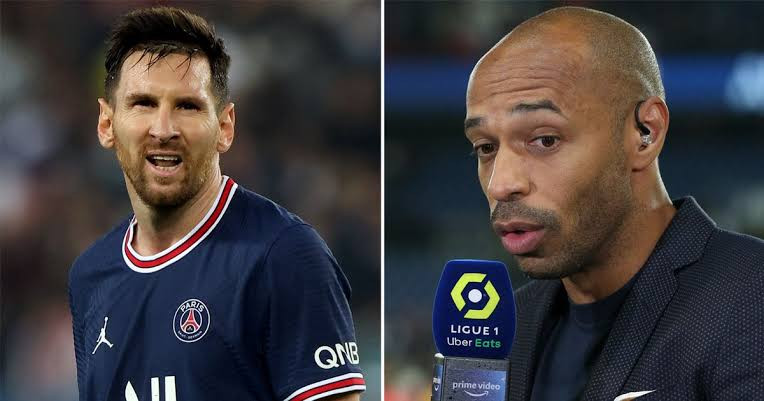 Thierry Henry, a former Arsenal and France football legend, has described why Lionel Messi is struggling at PSG in the French Ligue 1.

Messi is still getting used to Ligue 1, as he has yet to score in the French top flight for PSG.

PSG manager Mauricio Pochettino should play Messi in the middle position in his squad to get the best out of him, according to Henry, a former club colleague with Messi during their time together at Barcelona.

“He [Messi] is isolated, and he is less on the ball,” Henry said to RMC Sport.

“I wouldn’t say he’s depressed, but he’s lonely.” Through the middle, I favor him.

“I’m having a hard time with Leo over there on the right.” He may set the tempo in the middle. To get Mbappe, Neymar, and Messi to play together, something must be found.”

“I don’t think he can make the difference on the right,” Henry remarked, “but then again, I don’t have all the tactical details.”

“Obviously, you won’t have an impact if you stay high up and get out of the way. Then you’ll have fewer balls aimed towards him.

“Messi doesn’t say much; he communicates with the ball,” Henry explained. “For the time being, it’s Kylian’s team. Kylian is the one who is shining the brightest. The ball is moving closer to him.

“There can only be one conductor at any given time; otherwise, you won’t be able to play at the same tempo. And there are far too many conductors on this team.”

Many of those who have insulted Maria are now trying to steal someone’s husband or wife.

Many of those who have insulted Maria are now trying to steal someone's husband or wife.

Two alleged ritualists entice a woman from Lagos to Oyo, decapitate her, then dismember her body.